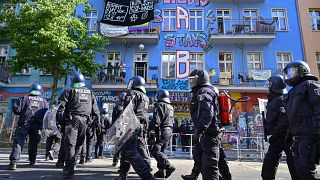 Police in heavy riot gear attempted to enter a building that has been occupied by squatters in Berlin,  a day after 60 officers were injured in riots outside the building. A German court has granted police permission to carry out a fire inspection inside the building at 94 Rigaer Strasse.

But as officers arrived to secure the area ahead of the inspection, they were met with stones and firecrackers being thrown at them from rooftops and the street. Police said 60 officers were injured when they responded to burning barricades set up outside the premises in east Berlin’s Friedrichshain neighbourhood. Several arrests were reported.

The partially occupied building, home to a 30-year-old communal living project and stronghold of the left-wing autonomous scene, has been a flashpoint of protests and face-offs with police. In February, two court decisions in favour of the building’s owner paved the way for a fire safety check to go ahead on the premises.