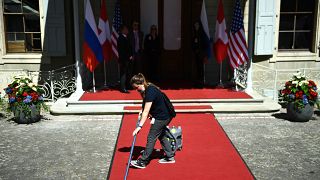 Geneva's town centre was bracing for a high-stakes presidential summit between US President Joe Biden and his Russian counterpart Vladimir Putin.

Extra police officers and military personnel were deployed along the Swiss city's lakefront and around the meeting venue, Villa La Grange, a grand lakeside mansion set in Geneva's biggest park.

Commuters were steered away from a vast security perimeter set up across the town's main bridge and lakeside promenades.

Police units with bomb-sniffing dogs were seen patrolling the cordoned off area at dawn.

Security convoys and army vehicles also drove up and down deserted thoroughfares ahead of the summit between the two leaders.