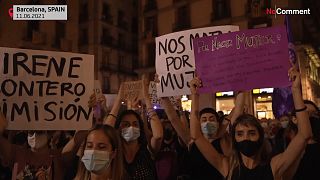 Women took to the streets of Barcelona late on Friday to protest violence against women and children following the discovery of the body of a child taken by her father without the mother's permission some weeks ago.

Thousands joined demonstrations across Spain as the country mourned six-year-old Olivia, the older of the two sisters abducted by their father over a month ago.

The country was in shock after investigators combing the seabed near the Canary Islands found the body.

Another similar bag that was empty was found nearby by a special oceanographic research vessel helping in the search, Spain's Civil Guard said, adding that the search for one-year-old Anna and their father, Tomás Gimeno, was still ongoing.

Gimeno and the girls went missing on April 27 in Tenerife, the largest island in the archipelago off West Africa.

Their mother, who is divorced from the girls' father, alleged he told her she would never see them again.

Men have killed at least 18 women so far this year in Spain, according to data from the Equality Ministry, which has recorded 1,096 deaths since 2013, when the country started keeping data on crimes of gender violence.

Abusers often use children as means to inflict harm on their partners or ex-partners: since 2013, 39 minors have been murdered in the country by their biological fathers.