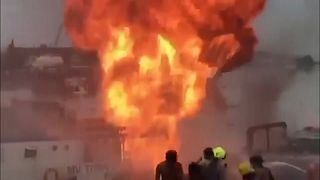 It was not immediately clear what triggered the fire, which raged for about seven hours aboard the MV Titan 8 and forced its crew to jump in panic into the Pasig River.

At least two crewmen who were on the vessel remained unaccounted for, officials said.

The vessel, which was carrying fuel drums, had docked at a wharf in Manila's Tondo slum district to refuel prior to a domestic trip to the western Palawan province.

Explosions rocked the vessel in the mid-morning followed by a fire, injuring crewmembers from the Titan and another vessel docked at the wharf, the coast guard said.

Smouldering debris and fuel drums from the Titan floated in the river and sparked a fire in a nearby slum that affected about 40 structures, mostly shanties, the coast guard said.

Footage from the Philippine Coast Guard showed the boat belch out flames and smoke as firefighters tackled the blaze.