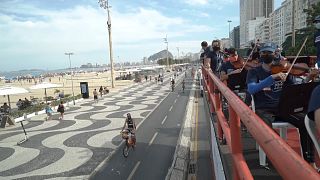 Musicians in Brazil beat lockdown restrictions on mass gatherings Sunday by taking their instruments onto the streets for a mobile concert in Rio de Janeiro.

Performers from the Maré do Amanhã Orchestra played from a sound truck that drove through the city's most popular beaches.

The mobile musical ensamble from the Maré favela complex offered a variety of popular and classical music scores while the truck drove through iconic beaches such as Copacabana, Ipanema and Leblon.

Musicians have not been able to perform to an audience as theatres remain closed due to COVID-19 restrictions.

The Project Orchestra Maré do Amanhã was founded by Carlos Eduardo Prazeres in 2010.

Son of a conductor murdered in 1999, he chose the Maré favela complex because it was where his father's murderer lived and wanted to use music as a way to change lives.

With 40 permanent musicians that also teach music to around 4,000 children, the project has performed in many venues and events around the country and also internationally - including a special performance for Pope Francis at the Vatican in 2017.