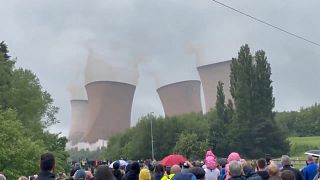 Hundreds of excited spectators turned up to witness the controlled demolition of four cooling towers at a former power plant in Rugely in Staffordshire.

Police had urged people to watch the demolition from their homes to comply with coronavirus restrictions, but many chose to ignore the call.

The 117m concrete towers, described in news reports as “iconic” and “having dominated the Staffordshire skyline for years,” were brought down in a controlled explosion at around 11.15 am, according to local reports.

The Rugeley Power Station has been closed since 2016 after being in operation for 53 years, local media reported. Its former operator, French energy firm Engie, is reportedly planning to redevelop the space to build more than 2,000 homes, 12 acres of employment space and a new neighbourhood centre.