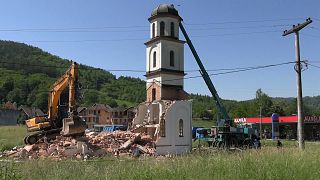 Using a crane, they brought down the white-coloured church and its tower bell.

The move comes after the European Court of Human Rights ruled in October 2019 that the authorities must remove the church.

The church was built shortly after Orlovic and her family were expelled from the village, 20 kilometres (12 miles) east of Srebrenica during the 1992-95 Bosnian War.

The family are Bosniaks, who are mostly Muslim, and the village was taken by Bosnian Serbs, who are mainly Orthodox Christians.

Orlovic's husband was among some 8,000 Bosniak men and boys murdered by Bosnian Serb forces in Srebrenica in 1995, the worst carnage of the ethnic conflict.

The Srebrenica massacre has been acknowledged internationally as Europe's only genocide since World War II.

Upon returning to her village after the war, Orlovic's demands that the church is removed were ignored.

In 2000, she launched legal proceedings to force the authorities of Republika Srpska, the name of the postwar Serb-run entity in Bosnia, to comply.

Local authorities have said they will rebuild the church at the entrance to the village.

Bosnia remains deeply ethnically divided long after the war ended in 1995 in a US-brokered peace agreement.

More than 100,000 people were killed in the conflict and millions had to flee their homes.