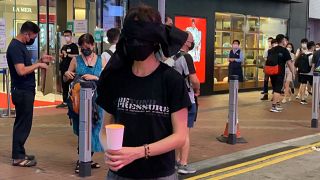 Discussion of tanks and troops quelling peaceful democracy protesters in Beijing on June 4, 1989, is all but forbidden in the mainland and there is heavy censorship of the images from the crackdown so well known in the rest of the world.

But in semi-autonomous Hong Kong, the date has been remembered with huge candlelight vigils in Victoria Park for the last three decades.

Last year's vigil was banned for the first time because of the coronavirus, but thousands defied police and rallied anyway.

Much has changed in Hong Kong over the last year as authorities seek to snuff out the city's pro-democracy movement using a sweeping national security law that criminalises much dissent.

This year's vigil has been banned again, ostensibly because of the coronavirus -- although Hong Kong has not recorded an unexplained locally transmitted case in more than a month.

Officials have also warned that the security law could be wielded against Tiananmen mourners.

So Hong Kongers are getting creative.