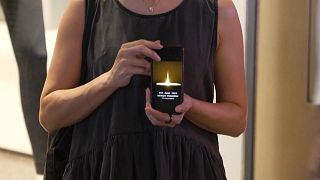 As the clock struck 8 pm in Hong Kong's shopping district of Mong Kok, dozens of people simultaneously turned their mobile phone lights on, a small gesture of defiance in a city where mass remembrance of Beijing's Tiananmen crackdown has been banned.

It was a scene repeated in multiple districts across the city.

For the last 32 years, crowds of Hong Kongers, often tens of thousands strong, have come together each June 4 in the city's Victoria Park to hold a candlelight vigil for those killed in 1989 when tanks and troops crushed pro-democracy protesters in China's capital.

This year, amid a widespread crackdown on dissent, police cordoned off the park, citing the coronavirus.

But flashes of defiance could still be seen, from graffiti appearing on walkways and bridges, to people shining lights and candles where they stood or resurrecting popular protest chants as they walked.