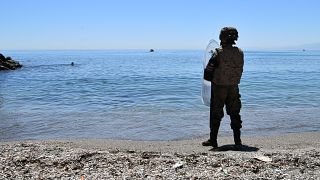 The men lined up under the sun at the border where police handed out appointments for preliminary interviews.

"We come here to ask for asylum and escape here," said Mounir Zerouali from Tetouan, Morocco who is one of approximately 10,000 migrants to have recently crossed into the Spanish territory.

"In Morocco there is nothing, there in no work. People are on the streets lost, wasting their lives for nothing."

Spain has agreements with Morocco to return adult migrants who do not apply for asylum.

Still, only a minority of those who can be deported are successfully sent back.

The vast majority of migrants were immediately pushed back to Morocco during the massive border breach on May 17 and 18, but hundreds have managed to remain in Ceuta as well as nearly 1,000 unaccompanied minors.

The challenge for the adults is not only to be allowed to remain in Ceuta, but find ways to move to mainland Spain where they hope to find employment.