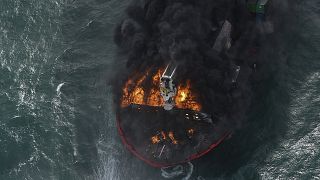 The fire on the MV X-Press Pearl has been burning since May 20, ravaging the ship, which officials said is only about five months old.

The navy said the flames were still burning Monday but had been reduced to “small spot fires” in the aft of the ship.

The vessel’s 25-member crew was evacuated on May 25 after an explosion. It includes Philippine, Chinese, Indian and Russian nationals.

The navy believes the fire was caused by chemicals being transported on the Singapore-flagged ship. A special police team has begun investigating the incident and the government is seeking to take legal action against the ship's owners.

Washed up debris from the vessel - including several tons of plastic pellets used to make plastic bags - has caused severe pollution on beaches.

Authorities have warned residents not to touch the debris because it could be contaminated with harmful chemicals.

The X-Press Pearl was anchored about 9.5 nautical miles (18 kilometres) northwest of Colombo and waiting to enter port when the fire began.

X-Press Feeders, the operator of the ship, said on Sunday that the vessel’s hull remains structurally intact and there had been no leakage of oil into the port’s waters.