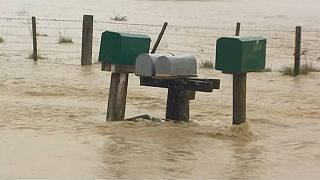 Aerial video showed the extent of the flooding in New Zealand's Canterbury region on Monday, as forecasters warned of possible heavy rain into the evening before conditions improved.

Authorities declared a state of emergency after some places received as much as 40 centimetres (16 inches) of rain over the weekend and into Monday.

Local media reported about 50 schools closed across the Canterbury region on Monday.

The military helped evacuate more than 50 people including several who were airlifted to safety by helicopter.