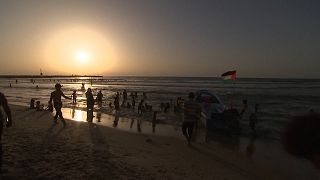 Children could be seen splashing in the sea as families sitting under parasols crowded a sandy beach.

"We are psychologically tired, but for the sake of the children we came to entertain them a little," said local resident Nuha Abu Ouda, who had come to the beach with her family.

An informal cease-fire came into effect on May 21, halting 11 days of fighting in which Israel carried out hundreds of airstrikes and Palestinian militants fired more than 4,000 rockets.

More than 250 people were killed, the vast majority Palestinians.

The sandy coast is one of the only outlets for recreation in Gaza, a narrow strip of territory where more than 2 million Palestinians have lived under an Israeli and Egyptian blockade since Hamas seized power from rival Palestinian forces in 2007.

The blockade and mismanagement by Palestinian authorities have taken a heavy toll on Gaza's infrastructure. Sewage has leaked into the sea, with the pollution spreading along the coast and into Israel.

But Gazans have few other ways of escaping the heat, especially in the summer months when temperatures regularly exceed 100 degrees Fahrenheit (40 degrees Celsius).