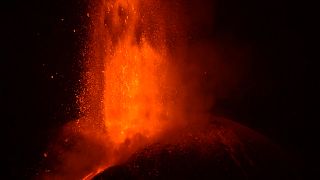 Mount Etna, the volcano that towers over eastern Sicily, erupted overnight Monday and into the early hours of Tuesday with fiery balls of orange lava bursting into the night sky.

According to Catania's National Institute of Geophysics and Vulcanology the explosion erupted in the southeast crater.

Etna is the largest of Italy's three active volcanoes which also include Stromboli, on the Sicilian island of the same name, and Mount Vesuvius near Naples which last erupted in 1944.