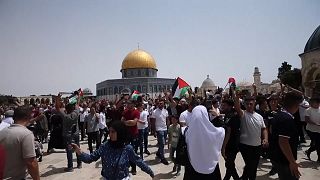 Clashes broke out between Palestinian protesters and Israeli police following Friday prayers at the Al-Aqsa Mosque compound, a flashpoint holy site in Jerusalem that is sacred to Jews and Muslims.

Clashes broke out between Palestinian protesters and Israeli police following Friday prayers at the Al-Aqsa Mosque compound, a flashpoint holy site in Jerusalem that is sacred to Jews and Muslims.

It was unclear what sparked the violence.

Police fired stun grenades and tear gas, and Palestinians hurled rocks after hundreds took part in a celebratory demonstration in which they waved Palestinian and Hamas flags and cheered the militant group.

Clashes between protesters and police there earlier this month were one of the main triggers for the war.

Earlier thousands took to the streets of Gaza as a cease-fire took hold at 2 a.m.

Celebrations also broke out overnight in east Jerusalem and across the occupied West Bank.

Israel captured all three territories in the 1967 war and the Palestinians want them for their future state.