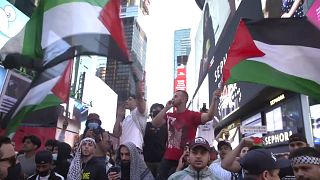 Pro-Israel and pro-Palestinian demonstrators gathered on opposing sides of the street in New York's Times Square on Thursday night following the announcement of a ceasefire in the Middle East.

Police broke up the crowd, arresting at least one pro-Palestinian demonstrator.

Israel and Hamas announced a ceasefire to end a bruising 11-day war that caused widespread destruction in the Gaza Strip and brought life in much of Israel to a standstill.

Hamas quickly followed suit and said it would honor the deal.

Hundreds of demonstrators in Iraq rallied in support of Palestinians in Gaza and Jerusalem on Thursday.

Protesters gathered in the centre of the capital Baghdad, waving Palestinian flags and banners with anti-Israeli messages written on them.

Some burned Israeli and American flags.

The protest was organised by several Shia groups and militias backed by Iran, such as Kataib Hezbollah, Rabaa Allah, and al Nujaba movement.

Hundreds of demonstrators march through the streets of Lebanon's capital Beirut to express their solidarity with Palestinians as the deadly violence between Israel and armed Palestinian groups in Gaza continues.