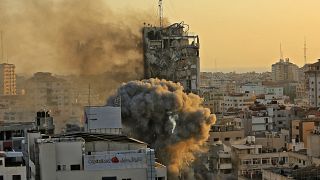 An Israeli airstrike downs 14-storey Al-Sharouk tower, which housed the bureau of the Al-Aqsa television channel, in Gaza City.

This airstrike startled a Gaza-based journalist as she was reporting for Al Jazeera.

The journalist, Youmna Al Sayed, continued providing details of the strike even as loud explosions forced her to move away from a rooftop position just dozens of meters from the site of the airstrike.

She was giving her account of the recent events in Gaza as fighter jets dropped two bombs on the building, which housed businesses in addition to offices for Hamas' Al-Aqsa satellite channel.

It's located on the busiest shopping street of Gaza, in the Roman neighbourhood.

The attack was part of escalating violence between Israel and Hamas, the worst since a 2014 war.