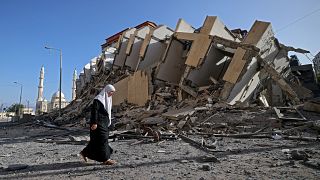 Palestinians check the damage at several sites across Gaza City after Israel pounded the Gaza Strip with relentless airstrikes in response to rockets fired at the Jewish state in the worst Israeli-Palestinian violence since 2014.

Israelis check the damage at their house the day after it was hit in a strike in Givatayim, a suburb of Tel Aviv, which was targeted during the night by rocket fire for the first in the suburb's history. More than 1,000 rockets have been fired by Palestinian armed groups from the Gaza Strip.