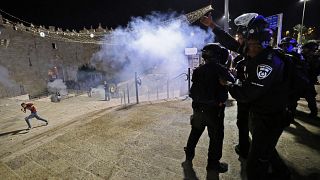 The mosque is on a hilltop compound that is the third-holiest site in Islam and the holiest in Judaism.

Tensions at the site, known to Muslims as the Noble Sanctuary and to Jews as the Temple Mount, have triggered repeated bouts of violence in the past.

Hamas militants in the Gaza Strip launched a rare rocket strike on Jerusalem after hundreds of Palestinians were hurt in earlier clashes with Israeli police at the iconic mosque.

Israel responded with airstrikes across the Gaza Strip, where 20 people, including nine children, were killed in the fighting.

It was a long day of anger and deadly violence that laid bare Jerusalem's deep divisions, even as Israel tried to celebrate its capture of the city's eastern sector and its sensitive holy sites more than half a century ago.