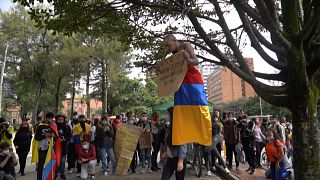 Colombians protest with arts performances, music and dance in the capital Bogota as anti-government demonstrations continue in the South American country.

Posters, candles and chants were part of the protests, this time in Bogotá's western neighbourhood of Teusaquillo.

At least 24 people have died while hundreds more have been injured in more than a week of protests against President Ivan Duque.

At least 85 people had also been reported missing, and 306 civilians were injured during the protests. Police reported 540 injured officers.

According to the non-governmental organization Temblores, the figures could be higher; and they have reported cases of alleged sexual abuse by the police.