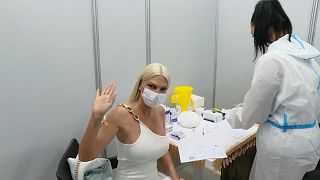 One of Serbia's most famous music stars joined hundreds of people at a shopping mall in the capital Belgrade on Thursday as they received their coronavirus vaccines.

Jelena Karleusa, a popular folk singer who was previously said to be a critic of vaccinations, also showed up for her shot.

She denied she was against vaccines and said she wanted to show solidarity with Serbia's health workers.

Serbian authorities are looking for incentives to revive a vaccination drive that has slowed down in recent weeks amid widespread anti-vaccination and conspiracy theories.

The government has promised a payment of around 25 euros to everyone who gets vaccinated by the end of May.

About two million people so far have been vaccinated, primarily with Chinese Sinopharm jabs, followed by Pfizer-BioNTech, Russia's Sputnik V or AstraZeneca.