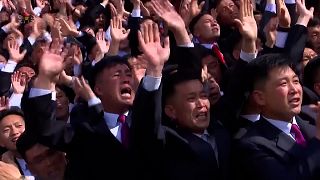 Kim poses for photo with youth league after congress

North Korea has changed the name of its main youth league, rechristening it the "Socialist Patriotic Youth League."

It's a little more snappy than its previous incarnation, the "Kimilsungist-Kimjongilist Youth League."

The name change took place at a major meeting of the mass movement this week in the capital Pyongyang.

Leader Kim Jong Un showed up for a group photo with thousands of the participants after the event, according to state media.

The group photo follows a long-established North Korean tradition of presenting leaders together with different sections of society.

The last congress of this youth league was in August 2016. Before that, it had not held a meeting since the 1990s.

North Korea has cut contacts with the outside world since the start of the pandemic.

Pyongyang's state media continue to emphasise strict precautions against the spread of the coronavirus, but have not announced plans for vaccination of the population.

In spite of COVID-19 concerns, North Korea has held a series of high-profile massive gatherings this year, where most people are usually seen wearing masks.