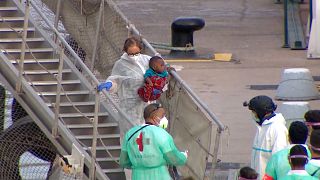 Spain rescues 41 migrants off the coast of Canary Islands

A Spanish patrol boat which intercepted and picked up 41 migrants, including nine women and three children yesterday afternoon south of the island of El Hierro, on the Canary Island of Tenerife arrives and docks at the port of Los Cristianos.

Officials say that a separate boat found drifting off the coast with the bodies of 17 migrants on board will be towed on Tuesday to one of the archipelago’s islands.

Migrant arrivals on the Atlantic archipelago surged after increased patrols along Europe’s southern coast dramatically reduced crossings to the continent via the Mediterranean.

At its shortest, the sea crossing to the Atlantic islands from the Moroccan coast is around 100 kilometres (62 miles) , but it is a notoriously dangerous route because of strong currents. Vessels are also typically overcrowded and in poor condition.