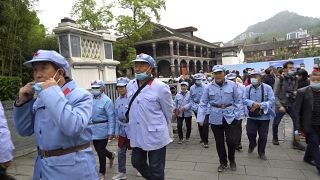 Tourism is booming in parts of China as people mark the 100th anniversary of the Chinese Communist Party.

Tourism is booming in parts of China as people mark the 100th anniversary of the Chinese Communist Party.

The Jiangxi province has experienced an influx of tourists this year as post-pandemic travel returns.

To mark the hundredth anniversary of the Chinese Communist Party, tourists are flocking to historic locations suchas Jiangxi and Guizhou provinces.

Tourism has been spurred by President Xi Jinping's campaign to educate the Communist Party's 91 million-plus members on its history and ideology.

Events are being scheduled nationwide to mark the anniversary, including exhibitions, films, plays, concerts and awards for long-serving party members.

A ceremony is also expected on July 1, the day the nation marks the centennial, with a speech by President Xi.