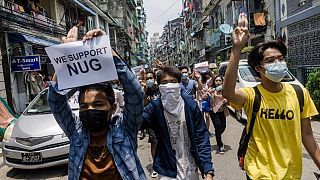 Others held flags modeled after that of the United States and representing the federal union they wish to see emerge.

Almost all of them marched with their hands raised in three-fingered salutes, symbolic of opposition to the rule of Senior General Min Aung Hlaing.

The group quickly dispersed to avoid the likelihood of running into police or soldiers.

Such open protests have become less frequent in Yangon since a brutal crackdown by the security forces began.

The meeting angered many people in Myanmar by appearing to legitimize his power grab while denying a place at the table to a representative of the elected civilian government he overthrew.

PROTESTS IN MYANMAR YANGON NEWS
Now playing Next
no comment