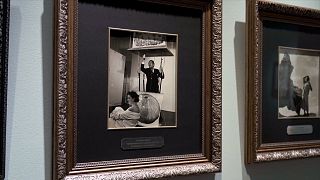 The exhibit contains more than 150 works by the late painter, most taken from Russia's largest private Dali collection and being exhibited for the first time.

Art lovers in Perm are taking in a new Salvador Dali exhibit, named "Surrealism is Me", at the city's Central Exhibition Hall.

Among the more than 150 items on display are glass sculptures, graphic works, and original photographs of the late surrealist painter.

The exhibit also features ten series of Dali's graphic works, many showing different techniques, including woodcut, lithography, and even bulletism, an artistic technique that involves shooting colour bullets onto a blank canvas.

"The main charm of this series, I think, is in subtlety, in airiness, in the tenderness that is presented here," says Marina Feldblum, Head of Perm's Central Exhibition Hall.

"All these works are made only in a single copy because each work Salvador Dali was finishing by hand. At some places, he was applying glue and putting golden foil on it."

At the time, Dali departed surrealism, and experimented with other forms of art.

Watercolors, drawings, and illustrations from the period are on display in the Perm exhibit.

One of the central areas of the exhibit is devoted to Dali's glass sculptures.

There are thought to be only 28 such sculptures made, three of them are displayed in the exhibit, including this green-coloured work, known as "Flowers of Evil".

"For Salvador Dali, it was very important that those objects he was making were not only abstract surrealist art but is an object that could become part of the interior. His art, his surrealism, has become a part of life. It was a very important step for him," says Feldblum.

"In total, he made around 28 glass objects. We have presented three of them at the exhibition. This one is the Flowers of Evil that is reminiscent to (Charles) Baudelaire's Flowers of Evil."

The exhibit also includes new 3D media. "Living Dreams of Salvador Dali" immerses visitors in the world of surrealism, in which the artist's images and characters seemingly come to life.

"Here, most of all that impresses is new works and new series that we have not seen before," says visitor Olga Anisimova.

"It is interesting the various techniques that Dali was working in, like etching, xylography, lithography, diverse formats are presented here. We can see him as an illustrator or as an interpretation."

The exhibition, "Surrealism is Me", will run at Perm's Central Exhibition Hall until May 30 (2021).

Dali, considered one of the fathers of surrealist art, died in 1989.