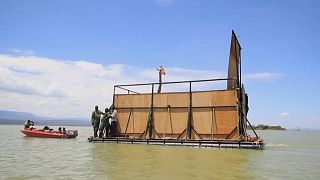 The island is sinking due to rising water levels, making survival for the group of giraffes that once lived here impossible.

The giraffes, originally from the mainland, were transported to Longicharo Island ten years ago as part of a conservation project to expand the species into a wider area.

The mission started in December last year. It's a joint effort organised by the Kenya Wildlife Service, the Northern Rangelands Trust, Save Giraffes Now and the Ruko Community Conservancy.

In 2016 giraffes were added to the IUCN Red List of Endangered Species and classed as Vulnerable. Kenya currently has a population of around 800 Rothschild's giraffes whose existence is mainly threatened by loss of habitat, predation and poaching.

With mission now accomplished, rangers at Ruko conservancy say they are already seeing improvements in the health of the giraffes and expect them to expand their number in the very near future.