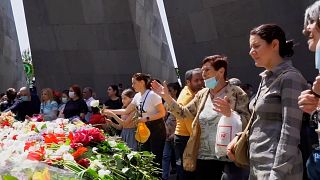 Armenians visited the country's memorial to the victims of massacres, deportations and forced marches under the rule of the Ottoman Empire.

The massacres began more than 100 years ago. An estimated 1.5 million Armenians died.

Armenians have long pushed for the deaths to be recognised officially as genocide.

But while Turkey does not deny that many died in that era, the country has rejected the term genocide, saying the death toll is inflated and that the deaths resulted from civil unrest during the Ottoman Empire's collapse.