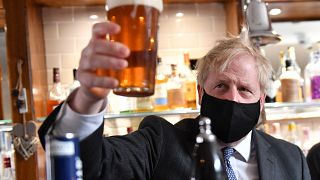 Boris Johnson enjoys a pint in a pub in Wolverhampton, the first time he's done so publicly since Covid restrictions eased to allow hospitality venues with outdoor seating to re-open. The prime minister was expected to mark the reopening of pubs last week, but the death of the Duke of Edinburgh saw a week of official mourning during which appearances by government ministers were limited.

The Labour leader, Sir Keir Starmer, has been thrown out of a pub in Bath after he was confronted by the landlord over lockdown restrictions.

Rod Humphris, who runs The Raven pub, said he was unhappy with Labour's response to government lockdown measures.

He said the economy had been sacrificed "because old people are dying".

When Sir Keir stepped inside, Mr Humphris told him to "get out of my pub".