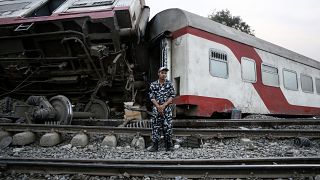 It was the latest of several rail accidents to hit the country in recent years.

Four train wagons ran off the railway at the city of Banha in Qalyubia province, just north of Cairo, the railway authority said in a statement.

The train was travelling to the Nile Delta city of Mansoura from the Egyptian capital, the statement said.

Salvage teams could be seen searching for survivors and removing the derailed wagons.

It was not immediately clear what caused the train to derail.

Last week, at least 15 people were injured when train carriages derailed in the Nile Delta province of Sharqia.