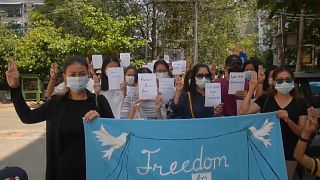 Protesters in Myanmar gathered Thursday in Yangon to remember those who have lost their lives after the military's government takeover in February.

The demonstrators, calling for democracy, said a prayer to honor the dead before releasing small birds into the sky and marching through the streets of Ahlone township in the west of the city.

The government's violent response to anti-coup demonstrations has seen 715 people killed by security officials, according to the Assistance Association for Political Prisoners.

Last week, at least 82 people were killed in one day in a crackdown by security forces on protesters, according to reports from independent local media and AAPP.

The protests continued Thursday in various parts of Myanmar even as people boycotted the official celebration of Thingyan, the country's traditional New Year, usually a time for family reunions and merry-making.

The military takeover ousted leader Aung San Suu Kyi's elected government and put a halt to the progress Myanmar had made toward greater democratization after five decades of military rule.