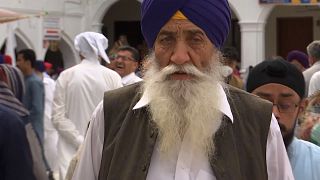 Hundreds of Sikh pilgrims from India and Pakistan converged on a temple in northwestern Pakistan to celebrate Vaisakhi, one of the most important festivals for the Sikhs.

Some 800 Sikh devotees came from neighboring India to the Sikh holy site of Gurdwara Punjab Sahib, in the town of Hasan Abdal.

It was the first time that some Sikhs were able to visit Gurdwara Punjab Sahib and other shrines in Pakistan since the start of the coronavirus pandemic.

Vaisakhi, which falls on April 13 or 14 depending on which of two dueling calendars one follows, marks the day in 1699 when Sikhism took its current form.

Pilgrims also flock to touch the imprint of a hand on a stone wall believed to be that of Guru Nanak, the founder of Sikh religion.

During the celebration, pilgrims also wash and children pray in the sacred waters that surround the inner sanctum of the Gurdawara.

The water has a special significance for the bathers.

Sikhs believe the spring that feeds the moat was created through a miracle performed by Guru Nanak by making an endless fountain of water spring up from barren land.