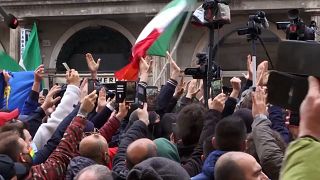 Italian restaurant owners and others angry at having their businesses shut for weeks due to the virus lockdown clashed with police Monday during an uauthorised protest near Parliament in Rome.

Many in the crowd of a few hundred protesters shouted "Freedom!"

Some hurled smoke bombs while riot police tried to block protesters from reaching the Parliament building.

Only a week earlier another similar protest ended with violent clashes with police right in front of Italy's Lower Chamber and a police officer was injured.

Dining and drinking at restaurants, bars and cafes are currently banned through at least April in most regions, to control the spread of a new wave of coronavirus infections.

Only takeout or delivery services are permitted.

Italy's current and previous governments have allocated millions of euros in aid to categories particularly hard-hit by pandemic restrictions.

But the business owners insist they need to re-open permanently.