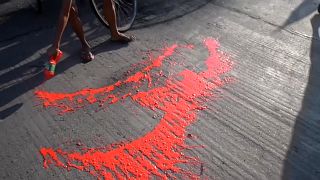 Anti-coup protestors in Myanmar splashed red paint on the street in Yangon on Sunday, symbolising the blood shed by demonstrators since security forces began a lethal crackdown to suppress their movement.

Bystanders clapped and took leaflets from them as the small group walked through the city's Tamwe area, carrying a banner denouncing the military takeover at the beginning of February.

The development came after at least 82 people were killed on Friday in the city of Bago, according to reports from independent local media and the Assistance Association for Political Prisoners (AAPP), an organisation that keeps track of casualties since the February coup.

It was the biggest one-day deal toll for a single city since March 14, when just over 100 people were killed in Yangon.

Bago is about 100 kilometers (60 miles) northeast of Yangon.

The Associated Press is unable to independently verify the number of deaths.

At least 701 protesters and bystanders have been killed by security forces since the army's takeover, according to the AAPP.