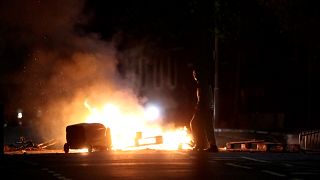 Another night of violence on the streets of Belfast, with people setting fires, throwing petrol bombs and stones over "peace gates" separating communities on Lanark Way.

The violence follows a week of rioting which some have suggested is the first evidence Brexit turbulence may be boiling into unrest in the British province, where post-EU rules are stoking fury among pro-UK sections.

Some residents in Sicily have been advised to stay indoors after heavy rain caused cars to be submerged and flooded streets in some municipalities.