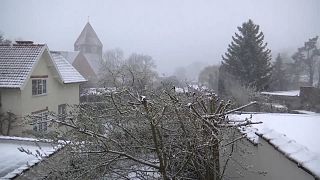 Belgians woke up on Tuesday to a dusting of snow in the capital in an unusual weather event for this time of the year.

Trees and grass were covered by snow in Brussels' Bois de la Cambre park and the roofs of properties also received a rare dusting of the April snow.

More snow was forecast in Brussels later on Tuesday.