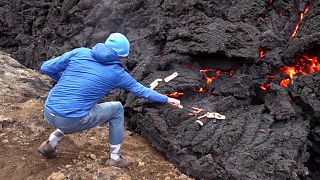 The Fagradalsfjall volcano erupted about ten days ago in Iceland. The spectacle is breathtaking.

Those are hypnotique images. A lava flow that sculpts the Icelandic landscape. The Fagradalsfjall volcano had been dormant for eight hundred years and woke up 17 days ago. Since then, the deep black is mixed with the incandescent orange. And thousands of Icelanders come to see this lava field.

Five million cubic metres of volcanic rock have been expelled in 17 days, the equivalent of 20 Olympic swimming pools.

Iceland is proud of its volcano, especially as it is not a threat to anyone as it is in an uninhabited area. Passers-by can take pictures or pick up a lava stone as a souvenir. Some people even boil their tea water on the lava or make hot dogs. An impressive volume of lava has accumulated over the last few days and contrary to appearances, the flow has not cooled down.