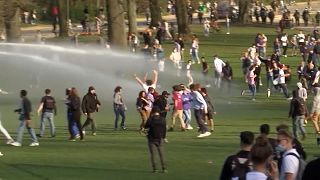 Police use water cannon to disperse crowd in Brussels

Belgian police clashed with a large crowd Thursday in one of Brussels’ biggest parks after thousands of revellers gathered for an unauthorized event despite coronavirus restrictions.

Clashes started after police ordered the crowd to disperse toward the end of the afternoon.

An AP reporter saw people throwing bottles and other projectiles at police, who used water cannons and tear gas to disperse the crowd.

The festival, dubbed “La Boum" ("the party"), had been advertised on social media and police had warned it was a fake event on April Fool’s Day.

According to Brussels police, up to 2,000 people still showed up in the Bois de la Cambre to attend.

Large crowds have been gathering in Brussels parks this week to enjoy the unusually sunny, warm weather, despite coronavirus restrictions limiting outside gatherings to four people.