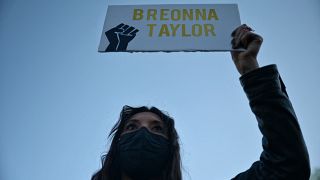 She was killed by police officers during a raid of her apartment.

"They dropped the charges against me and that's a nice start," says Breonna Taylor's boyfriend Kenneth Walker on stage during the rally, before adding, "that's not where we finish. We got to keep going."

The attorney representing Breonna Taylor's family, Ben Crump, tells the crowd "We will forever remember Breonna Taylor for raising the consciousness level in America that Black women lives matter too."

US President Joe Biden on Saturday declared his support for reforms.

"Breonna Taylor's death was a tragedy, a blow to her family, her community, and America," he tweeted.

"As we continue to mourn her, we must press ahead to pass meaningful police reform in Congress. I remain committed to signing a landmark reform bill into law."