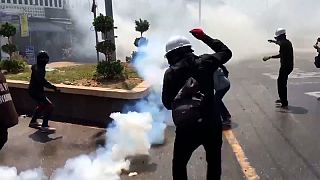 This footage shows the latest anti-coup protests in Myanmar.

Tensions rose in Mandalay as riot police went into housing areas to clear barricades from streets in Myanmar's second-largest city.

There were also clashes in Dawei, where police bombarded anti-coup protesters with tear gas.

The demonstrators used water, blankets and fire extinguishers to try to smother the smoking canisters but were eventually forced to give ground and disperse.