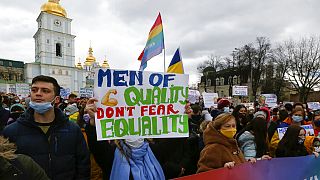 Activists in Ukraine marched to demand the country ratifies the Istanbul Convention, a Council of Europe measure to combat violence against women.

The demonstration in the capital Kyiv came on International Women's Day.

Many of those in the Monday march in Kyiv held flowers and wore traditional Ukrainian national costumes.

"Like in any other country in the world, women in Ukraine are not equal to men in their rights, their opportunities," said Inna Sovsun, a Ukrainian MP. "But I'm so happy to see so very many people today on the streets of Kyiv, who are fighting against that."