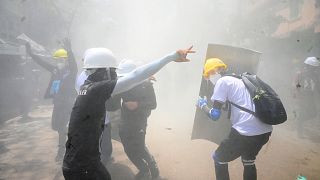 Footage shot on Sunday in Mandalay shows Myanmar security forces kicking, beating and stamping on a prone, motionless body, then dragging it away down the road, still showing no sign of life.

Footage shot on Sunday in Mandalay shows Myanmar security forces kicking, beating and stamping on a prone, motionless body, then dragging it away down the road, still showing no sign of life.

As the assailants – apparently two policemen and a soldier – carry out their assault, the person recording the scene from a high building nearby cries out in anger at what is happening.

The Associated Press could not confirm whether the man was alive during the beating.

The fate of the beaten man is not known.

The incident took place shortly after riot police attacked a large, peaceful protest against the military junta with tear gas, then chased after the demonstrators as they fled down side streets or sought refuge in nearby buildings.

Daily shows of defiance continue against the junta, which ousted the civilian government on February 1.

The crowd, which included teachers, university and medical students, was seen sitting on the ground listening to speeches.

More than 50 demonstrators have been killed by police and soldiers across Myanmar since security forces, loyal to the new military government began a brutal crackdown to suppress opposition.