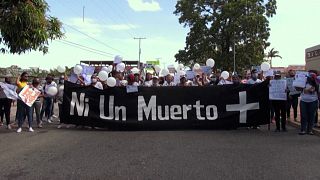 Around 300 people protested in western Venezuela on Friday, calling for justice after three women were murdered in less than a week.

The demonstrators were taking a stand against femicide and the gender-related killing of women and girls.

"I want night patrols taking care of all of us because we have the right to go out in the street with no fear," said one protester.

Angelique Gutierrez, aunt of murdered Eduarlis Falcón said: "It's got to be solved, not left unpunished, this vile, cruel murder, on the hands of those monsters who have destroyed our souls and our family."

Independent initiative by communication platform Utopix, Monitor de Femicidios, estimated there were 256 femicides last year in Venezuela, compared to 167 in 2019.