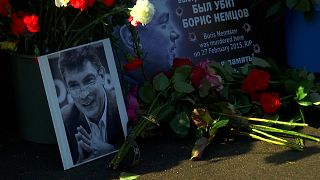 Mourners formed a long queue to add their tributes to the memorial, after the annual march to commemorate Nemtsov was cancelled due to coronavirus restrictions.

Nemtsov was an outspoken critic of Russian President Vladimir Putin, and his killing on February 27, 2015, was seen as a blow to forces opposing the country's longtime leader.

An officer in the security forces of Chechnya's Kremlin-backed leader was sentenced to 20 years in prison for firing the shots that killed Nemtsov.

Four other men were jailed for between 11 to 19 years for their involvement in Nemtsov's killing.