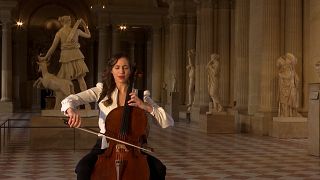 At over 500 years old, the Mona Lisa will have seen many things in her life on display - but rarely this: almost four months with no visitors.

At over 500 years old, the Mona Lisa will have seen many things in her life on display - but rarely this: almost four months with no visitors.

With the Louvre closed due to COVID-19 restrictions since late October, what could be the world's most famous painting stares out from her panel across bulletproof glass into the now-silent emptiness of the grand building.

But on Friday, the museum wasn't entirely empty.

Beyond the Mona Lisa, in the Louvre's Salle de Caryatides - a room designed by Pierre Lescot in the 16th century and filled with Greek works of art - Franco-Belgian cellist Camille Thomas performed a series of pieces by classical composers for a special video set to air on YouTube March 5.

It's the ninth in a series featuring the musician performing in empty buildings, with previous venues including Versailles and the Grand Palais.

Thomas, who went viral during France's first lockdown in 2020 with a video of her playing her 1730 Stradivarius cello from the Paris rooftops, says playing in inside the Louvre was a transformative experience.

"It's really for me extremely moving because I find myself amid eternity, amid absolute hope," said Thomas.

She hopes her performance inspires others and brings them comfort during this difficult time.

"I think that art can make us immortal and my goal is just to share this feeling and this hope with people through this video, through this image".

Despite requests for her to perform in empty museums across the globe, Thomas is looking forward to performing music in front of people again.

"I have received an enormous amount of messages from museums around the world asking me to come and perform and I'm hoping that this period in which I'm performing alone in museums will soon be over and that soon I'll be able to share – and that's the moment of eternity, the unique moment with others," she said.