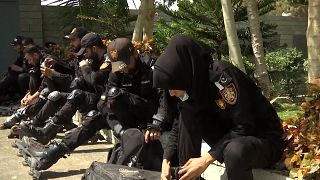 Pakistani authorities have established a special rollerblading police unit to curb crime in the Southern port city of Karachi.

The city is thickly populated and comprises several shanty towns where conventional police vehicles cannot go due to narrow lanes.

The rollerblading police have followed in the footsteps of similar units in Europe and elsewhere and have already been deployed to work outside the venue of the Pakistan Super League cricket tournament.

After a month of training, the new squad will be deployed around the city's narrow streets and passageways, busy intersections and in shopping centres.

Russia fired a salvo of missiles at Ukraine's second city, Kharkiv, overnight, hitting a railroad yard and knocking out power to more than 18,000 homes.