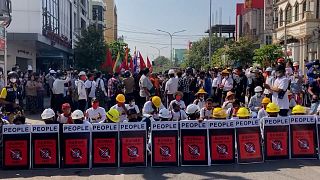 Armed police in Myanmar blocked the path of anti-coup protestors as they marched in the flashpoint city of Mandalay on Wednesday.

About 3,000 teachers and students stood their ground a short distance from the barricades and barbed wire as the police watched impassively, holding riot shields and cradling rifles.

After playing protest songs and listening to speeches condemning the February 1 military coup, the demonstrators moved away, thrusting three-fingered salutes into the air as they went.