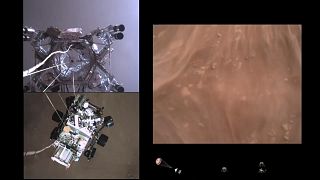 NASA on Monday released the first high-speed video of a spacecraft landing on Mars.

It's such good quality and so remarkable that members of the rover's landing team say they felt as though they were along for the ride.

The footage shows the Martian surface below, with the rover getting slowly closer to landing, and dust on the surface being disturbed before it finally touches down.