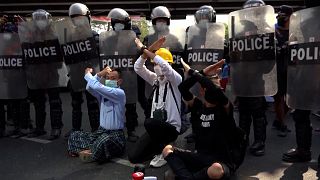 Officers in riot gear face off against protesters in Yangon

Tension between anti-coup protesters and police was heightened Friday in Myanmar's largest city Yangon after officers moved in to contain the demonstration from spreading into traffic.

Officers in full riot gear faced off against the protesters whose numbers had steadily grown at the busy city junction in the Hledan area, a regular location for rallies against the February 1 military takeover.

The demonstrators chanted for the release of the detained, elected civilian leaders and held up banners with slogans such as "Get out terrorist dictator" and "Respect our votes, say "no" to military coup", while the police stood, largely impassively, in front of them, though witnesses said some used their shields to push against them.

"Why are they using so much force? They pushed us violently. Why did they do that?" said one young protester who had argued with an officer, but declined to give his name out of fear of repercussions.

"Look at them. Do they need to act like this? We are not blocking any roads. They intentionally used this force. They shouldn't do that," he said.

There were no reported arrests.

Rallies continued unabated on Friday in Yangon and other cities across Myanmar.