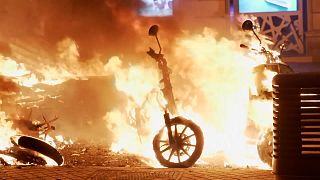 Pablo Hasel: Violence in Madrid and Barcelona over rapper's jailing

Spanish police clashed on Wednesday night with protesters in Madrid and Barcelona, as fresh demonstrations broke out over the jailing of a rapper for tweets insulting police and the monarchy.

Masked protesters threw bottles at police, who charged at them in clashes that lasted for several hours, AFP journalists reported.

Madrid's conservative mayor condemned the violence, tweeting: "The violent and those who do not accept the rules have no place in our society."

In Barcelona, there were also altercations between police and protesters following heavy clashes on Tuesday night, with demonstrators lobbing objects at officers and setting barricades made with dustbins ablaze.